Thailand, which is known as the country of the White Elephant, is very famous for its tourism, natural scenery, cultural tourism, also culinary. For those of you who often explore content about street food, then you may be familiar with the characteristics of Thai food which can be found in traditional markets and street food vendors. On average, Thai food is made with a rich taste and is full of spices. 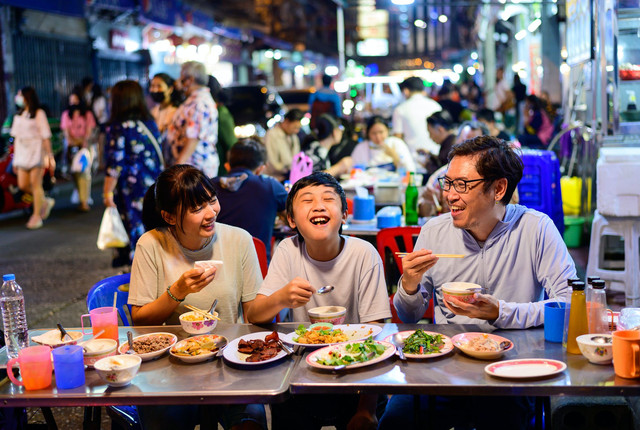 Not only that, the food there combines a balance of spicy, sweet, salty and sour flavors. However, if you look more specifically, a particular Thai dish has 4 types of regions that make different dishes. Starting from Northern Thailand, Northeastern Thailand, Central Thailand, and Southern Thailand. Each of these regions generally has a cuisine that gets influences from Chinese cuisine as well as cuisine from its neighboring countries.

Pad thai is one of the typical Thai dishes that has the word Thai in its name. Pad thai is a type of dish in the form of stir-fried dry rice noodles which are soaked and then cooked with eggs, bits of tofu, and special spices. At first glance, Pad Thai is similar to kwetiaw, which is flat and flat. The spices used include tamarind, fish sauce, dried shrimp, garlic, shallots, chili peppers, brown sugar, and served with sliced lime and roasted peanuts.

Apart from that, this dish can also use vegetables such as bean sprouts, chives, pickled radish, and banana flowers. Most pad thai is served separately with dips, red chilies, lime wedges, roasted peanuts, bean sprouts, and other fresh vegetables. Pad thai is generally eaten with animal protein sources such as beef, shrimp, squid, and so on. Pad thai can be modified as a vegetarian-friendly meal by substituting fish sauce for soy sauce and not using prawns.

In 2011 pad thai was ranked 5th in the record for the World’s 50 Most Delicious Foods Readers award held by CNN International. Pad thai is also one of Thailand’s national dishes which can be found in Thai restaurants or street vendors.

Not only pad thai, tom yum is also a Thai dish which is very well known by the world community, including in Indonesia. Tom yum is a kind of spicy and sour soup made from fresh ingredients such as lemon grass, galangal, lime leaves, lime juice, fish sauce and chili powder. Tom yum comes from 2 words namely ‘tom’ which means the boiling process and ‘yum’ which means special Thai spices. In Thailand, traditionally tum yum uses a combination of shrimp, chicken, fish, mushrooms and other types of seafood dishes.

Khao pad is a Thai dish that is very similar to fried rice in Indonesia. This is a dish from Central Thailand. What distinguishes Thai fried rice and fried rice in general is the use of jasmine rice which is a type of long grain rice originating from Thailand. Usually the spices used or the toppings are similar to those found in Indonesian fried rice, such as meat, shrimp, crab, eggs and chicken.

Tom kha kai is a Thai dish that at first glance is similar to tom yum. This dish is in the form of a kind of soup using coconut milk so that the color of the broth is milky white but has a spicier taste than tom yum. The spicy taste offered is the result of using a lot of chilies. For lovers of spicy food, tom kha kai can be a delicious option compared to regular tom yum because the level of spiciness is very high. Whatever the seasoning, they don’t use coloring food.

Usually tom kha kai is served hot with the addition of shredded chicken and lime leaves which give a fresh aroma when consumed. Tom kha kai soup gets along well with Indonesian tongues. This can be a daily side dish eaten with warm white rice. Although not required, tom kha kai can be served with a sprinkling of shallots and crackers which are sure to increase your appetite.

Kaeng phet is literally known as red curry originating from Thailand. Kaeng phet is made from a combination of red curry, coconut milk and meat. While the spices used are dried red chilies, galangal, cumin, pepper, garlic, shallots and shrimp paste. The taste of kaeng phet tends to be full of spices and spicy flavors. It is usually served with warm rice which is also favored by foreign tourists visiting Thailand. This coconut milk curry soup has a thick gravy which in some restaurants also adds pineapple slices to add freshness to the taste.

Thai cuisine does not only serve heavy food. But there are snacks that you can also enjoy. Tod Mun Pla Krai is a fish cake made from ground fish seasoned with kaffir lime leaves and red curry paste. The cooking method is fried which creates a shape and texture similar to otak-otak in Indonesia. The fish used are generally back hair fish.

But if this type of fish is hard to find, then it can be replaced with other hard white-fleshed fish such as mackerel and cod. This snack is considered one of the most expensive snacks in a Thai restaurant. Tod Mun Pla Krai is served with fish sauce or Sri Raca, a Thai chili sauce. The flavors offered are spicy, savory, sour, as well as fragrant.

Not only red curry, Thailand also has dishes in the form of green curry soup. The green color of this curry comes from green chilies, which offers a more subtle spiciness than red curry curries. Kaeng Khiao Wan curry tends to highlight a slightly sweet, slightly spicy, and savory curry taste.

Kaeng Khiao Wan curry is made with fish, beef, or pork added with sliced eggplant and coconut milk. It is generally served with white rice or Thai vermicelli which is known as khanom chin. Meanwhile, thicker green curry is usually mixed with slices of beef and then eaten with chapati bread or rolled bread.

Unlike the leker topping found in Indonesia, khanom throw away is generally served with a topping of coconut cream and then sprinkled with grated coconut and fried egg slices. The modern variant also serves banished khanom topped with sliced shrimp meat. These snacks can be found along the way or in markets and tourist attractions in Thailand. Like leker in Indonesia, discarded khanom is also sold by cart at a very cheap unit price, only 2 baht per seed.

Kalamae is another Thai dish that suits the tongue of Indonesians. This dish comes from Northern Thailand which at first glance looks like dodol. Kalamae can be described as a sweet snack made from brown sugar syrup, glutinous rice, coconut milk, and sprinkled with sesame seeds. This Thai-style dodol is usually made for special occasions. The packages used are palm leaves or use clear plastic wrap or colorful ones such as red, green, yellow and brown. It is wrapped and cut into small pieces that resemble candy.